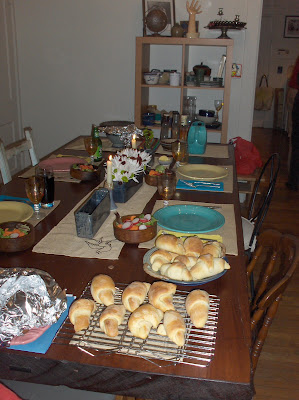 like a lot of people, we spent the day yesterday in the kitchen preparing food and then some more time at a big table eating it. Delightful. Thanksgiving is really my favorite holiday. Mostly because it is about family and food and booze, which are my three favorite things. I like that there is a minimal "product" aspect to it as a holiday, there is no expectation that there will be presents, there are no television events except the Macy's parade, really. The only expectation is that we will all be in the kitchen, making things that smell good, and then we will move to the table, which will be laid with a little formality, and we will each intone the things for which we are thankful, and then we will tuck in.

I like to have a little formality, which will not surprise you. Makes it seem like an event, a Thing That is Important. And honestly, living as we do so far from some of our family, having them here is an event. And to be celebrating this very American holiday with them is a good thing, and special, and a little formality is appropriate.

Spending the whole day making with them is a rare and beauitiful thing. As I have said and written elsewhere, I believe there is no fundamental difference between different types of making. They are all attempts to communicate, they are all creative acts, whether it is a furniture object or a relationship, a crocheted hat or a meal, an essay on a blog or a song or anything else. All comes from the same place, the same wellspring. So we spent the day making and then eating what we made. Cosied up in a house filled with smells and tastes and stories and wine and beer. And a lot of the food was served in pottery that my mom made, so my family was here a little, too.
My contribution was the rolls. These are the rolls that my mom made every year, twice a year. Cresecent rools, "Butterhorns" the cookbook calls them. I am pretty comfortable making a lot of different things, but I get easily flustered when confronted with baking. It is such an exact science, baking, and shrouded in mystery so I have do concentrate a lot when I do it. Which is twice a year. But I love using my hands in ways to which they are unaccustomed, and there is something so very vital about making bread. Stuff of life. The physicality of kneading the dough, the waiting for it to rise, all of this is a calming process and so steeped in ritual that I can not help but love it.
When I was at my second college, the art school, and living alone in an apartment and generally expected to take care of myself, there was one summer that I made bread every Saturday. I would mix the ingredients and set it to rise, and then put on my straw hat and light a big cigar, and go for a walk for an hour and smoke and enjoy the summer afternoon. Then I would come back and have a little wine and punch down the dough and make it into loaves and set it to rise again and take a nap for a half an hour. When I woke up, I put the bread in and started supper, and that was my ritual for Saturdays. And at the end I had bread for a week and had had a nice contemplative cigar and life was good.
My rituals have changed a lot since I was twenty one. That is a good thing. But I was kneading the dough yesterday and my mind was cast back to those lazy afternoons, and to what I was thinking about then and I raised my glass to twenty-one-year-old Zeke. He was on to something, I think.
This year, I am thankful for family. I am thankful for friends. And I am thankful that past events have led me to here. It is a good place to be.
Posted by zeke at 10:19 AM No comments:

Sequoia National Forest. Sometime soon I need to go and stand in the presence of trees that are five hundred years old. Trees that were saplings when Europeans first washed up on our shores. Trees that were already hundreds of years old when my grandfather was born. I think I need to stand among them for a little while and see what they have to say in person.

The "Floating Torii" gate at Itsukushima Shrine in Japan. And other Japanese temples, of course. It is such a different tradition of timber framing than the one that I know here. It must be magical to stand next to one of these massive structures. The woodworking tradition that goes into them resonates with me almost as much as the oone that I am heir to.

While in Japan, I would visit a Minka House. Again, a different style of timber framing, and the jointery is really amazing. I have been looking at this stuff in books for so long, but to be there in person, to smell the wood, that would be amazing. 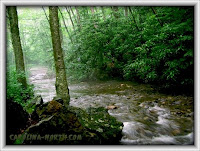 Pisgah National Forest. After our walk in the woods recently, I am really itching to get back to my old stomping ground. The mountains up here are so similar (they are the same mountains after all) that it made me really homesick for the stretch of them that I used to walk in. 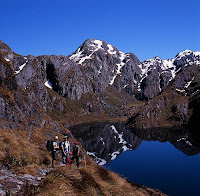 New Zealand. I hear it is just incredible. I always like to quote Douglas Adams, "The scenery in New Zealand makes one want to break into spontaneous applause." I happen to know someone who lived there for a while, and the reports are pretty good.

Of course sailing on the Lettie. Every time I see photos of her latest exploits, it makes me jealous. She is tied up in New York right now, but there are so many times I wish I could jsut transport myself to wherever she is and sit on the cross trees and listen to her sails full of wind.
This is a short list. There are more. Perhaps this will be a running exercise. It is fun to take these little trips in my mind, trips that I would take if geography allowed.

a walk in the woods 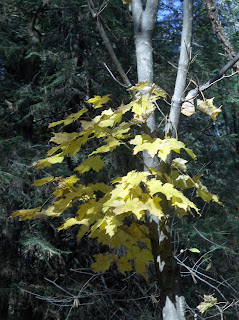 we went for a nice walk in the Berkshires this weekend.It has been a while since we went walking around in the woods. Much too long, in fact, given how much we both enjoy it.
It was a cool, crisp morning full of sunshine, with that bite in the air that says that it is not winter, yet, but it sure will be soon. The shadows of the trees were etched in frost on the ground, and as the Earth turned and the shadows moved their ghosts were still on the grass in spiky white crystals that melted slowly in the morning sun.
We started up through a meadow and then were in the woods, following an old rusty barbed-wire fence that marked the edge of some long-gone farmer's property. By and by we came to some persimmon and crabapple trees along that fence. I imagined the farmer's family planted them as little saplings and nurtured until they grew fruit big enough to make into jellies and put up for the long winters. Now they continue to make fruit, though only the deer and birds and squirrels enjoy the harvest, these days. Huge old twisted apple trees like those always make me think of Prince Caspian, and how the apple trees at Cair Paravel must have looked when the children returned after all those generations.
Up the hill from the fruit trees we came on the Appalachian trail. I have walked very small parts of this same trail, hundreds and hundreds of miles to the south, and could not help feeling a southerly pull standing looking at that sign. So much more impressive (or maybe poignant) somehow than an interstate that plows through hill and dale traveling the same distance. Here is a quieter highway, one that was made by people working together across vast distances to make a free and open way to walk these mountains. Down in Georgia there are folk who were on the same trail that we walked yesterday, maybe when we were on it. And in North Carolina. and up in Maine. Nice to have that company for a little bit. 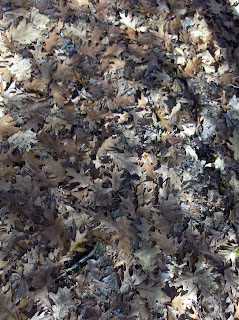 The hills and woods looked almost exactly like the woods that I grew up walking in. The calling cards of the local denizens littered the forest floor, announcing the presence of the same trees that I knew as a child: oak, maple, sycamore. The smell of the cycle of birth and death and rebirth assailed our noses, that utterly healthy smell of forests and outdoors and walking in the woods. We both miss it, and know we need to do it more.
There were a few trees still hanging on, still with vibrantly colored leaves, still living in the fall for a little longer. They greeted us with gently waving arms in the bright morning sunshine, and told us to come back soon, this summer if possible. We promised we would.
Often, I look at a tree and think about the lumber that is inside it, and whether it would be nice to work, or have some great figuring or strange grain pattern. This trip, though, I was happy to just be in the presence of these trees, who are so generous about letting us occupy their space. I did not think about them and how they could enter my world, I was happy just to be in theirs. It was so calming, that shift of view. It has been a long time since I looked at a tree and did not think about it slabbed up like a corpse on my workbench, but really and truly thought "that tree looks great right where it is, and I am glad that it is there and that I can see it there."
Different ways of thinking about wood. Always something to learn.
Posted by zeke at 7:29 AM No comments: