i haven't corroborated this but I was told a while back that the most common surgery performed in the world is one that is typically performed (in the U S at least) by the least qualified person in the room.  Imagine this:  a room full of doctors, residents, nurses, nursing students, one patient and that patient's family member.  Now imagine that a surgical procedure needs to be performed and the job is carefully prepared and then handed off the the sleep-deprived, terrified family member of the patient.  Sounds a little silly, but that is what the cutting of the umbilical cord has been for the birth of both of my sons.

At first I objected to the whole process on a couple of grounds:  first, as I say, that maybe medical professionals should perform medical procedures, not furniture makers.  Second, that it seemed a little patriarchal and condescending to me that the birth partner who has not done very much of the biological and physiological heavy lifting should, as a final flourish,  perform this very theatrical act.  It felt old-fashioned and arrogant in a "I brought you into this world and I can take you out of it" sort of way.

All of that said, I did cut both cords in the end and I am glad I did, though it is hard for me to articulate why I am glad about it.  As surgeries go, it is a pretty hard one to screw up, after all.  And it did sort of make me feel involved a little more directly.  But it was not the act of the cutting that I wanted to write about specifically here.  It was William H Ditmars, who I never met.

William H Ditmars was a country doctor in rural Michigan in the late nineteenth and early twentieth century.  I don't know a lot about him which is more my failing as a student than anything else.  The person who does know a fair amount about him is his grandson, who is the family historian.  He is also my father.  It was from my father that I learned to be so sentimental about objects and to revere the stories that we layer on to objects and to do my best to pass those along.  My father is the current curator of the Museum of the Collection of Leonard Family Artifacts, a duty which he is in the process of disseminating to those of us in my generation in the family.

My father and I share (in addition to membership in the Museum, of course) a love of tools.  Not just wood working tools, though we both love those as well, but any tools.  I am fascinated by the human drive to affect the physical world and by the lengths we will go to as a species to give in to that drive.  Humans as tool makers have made such incredibly complex artifacts in our quest to give shape to our world and understand it, and it never ceases to amaze me.  I love any well-made tool, whether it is for cooking or carving or looking or listening or fixing people or objects or making stuff.

It also interests me to look at the ways the tools that we use often evolve, or don't.  There are wood planes from ancient Rome that are nearly identical to the planes that I use, for example.  When we find a design that works it can stick around for millennia.  Then again, we are still so unsure how we feel about talking to someone that is not in the room with us that cell phones are not the same month to month.  The process of tinkering is innate in us as creatures, the need for constant refinement of our tools.

When I cut the umbilical cord on my first son, I was handed a standard pair of surgical snips.  Just sharp scissors with short blades, really.  The umbilical cord is rubbery and slick, and as I cut it sort of slid away from the blades, making for an awkward action that took longer than it needed to and scared me because I felt like I was holding things up and doing something wrong. 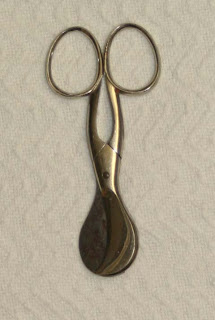 A few months ago, my father gave me these and asked what I thought they were.  Obviously they are surgical snips of some kind, of course, and they are obviously quite old, as they have certain visual qualities that place them æsthetically in the first part of the twentieth century.  They fit nicely on my fingers, and the curved blades still slide very satisfyingly past each other.  Not being a medical historian I had no idea what they were for specifically, of course.   My father said that they were umbilical cord snip and that they had belonged to his grandfather.  You see where this going.

These purpose-made little snips, with curved blades that capture the cord so it does not slide away as you cut, were designed for one thing and one thing only.  And I was going to be called upon to perform that act in the near future.  How could I not ask the doctor if it was ok?  His response was that there would be clamps on either side of the cut, and then another clamp at the baby's belly, so there was no risk of infection, so why not?  We have a very patient doctor who is pretty amused by us as a pair, I think, and this was just another weird question from us.  He is getting used to it.

Yesterday at about 10.20 in the morning, I used my great-grandfather's umbilical cord snips to cut my second son's cord.  I had carefully boiled them for a long time and kept them in a sealed ziplock bag in my pocket for three days, as you don't get an opportunity like this often and I did not want the moment to come and have them lying on the counter at home.  The moment came, I cut the cord, and they worked beautifully, performing the same action that they had been created to perform a hundred years ago.  It is so satisfying to use a well-designed tool.
Posted by zeke at 8:05 AM 3 comments: