when our second son was born this summer, a friend said to "there is a meadow on our land that we use for family occasions.  We have planted some trees there to commemorate various important dates, and if you would like to plant a tree up there for Charlie, we would love that."  Such a beautiful baby present, and of course we took him up on it.

It being only a couple of weeks after Charlie was born, Karen was not up to joining us, though she came to the house to introduce the baby.  My mother was in town, and Thomas came along.  Planting trees is such a joyous and hopeful thing, and it is always even more fun to do it with a group, so I was glad there were so many of us.  And we are trying to teach Thomas as many different creative acts as we can, so I was especially glad he would be there.

On the kind of summer day usually reserved for movies and greeting cards, we went all started up the side of the hill behind their house. The woods and the landscape up here remind me so palpably of the landscape where I grew up, it is like putting on a favorite shirt.  The woods we walked through had all been fields when our friends were young here, so this is a callow woods, lots of young, straight trees, reaching for the sun, the leaves a range of brilliant sap green where the sun hit them to the deep emerald of late summer.  Because this had been farmland we walked past some apple trees, long grown gnarly with their twisted trunks but still bearing fruit.

We don't spend as much time in woods as I would like, partly a function of living in a city and partly a function of how tightly my time is leveraged, and it was a pure joy to simply be surrounded by trees.  The air tastes different, the sun feels different on the skin.  On a sunny day in the woods there is something that makes me feel so safe, so tiny, and so hopeful, I miss it.

We walked out of the canopy of trees into the meadow, the bright sun suddenly brighter, and talked a little about things that had happened here over the years; a marriage, celebrations of different kinds.  We met the trees already there, a twenty-year-old maple planted for a niece when she was born, an oak tree planted as an acorn from the green at Yale University when my friend was a student there.  Maples grow so fast, it was so much taller and broader than the oak at the same age, these memories and markers in time manifesting differently depending on how we choose to commemorate them.


I had brought two saplings, both seedlings that took root from the big silver maple in our backyard.  One was from last spring and the other from this spring, one for each boy.  I liked that they came from our home, and that there would be a connection, as the boys grow and play in tree houses that we build in the tree or ride swings hung from the branches, these two young maples will be quietly growing on a meadow at the crown of a hill.  We have plans to visit them frequently, to say hello to help us stay mindful of different ways of celebrating new lives. 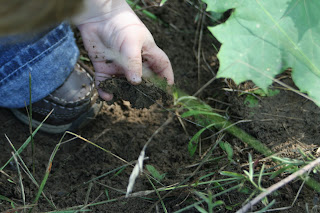 Thomas helped by putting dirt around the saplings after the holes were dug and by holding worms for us.  Compared to planting trees in our backyard, which has seen a lot of use and is pretty tightly packed, the loose, lovely loam of the meadow offered little resistance to the shovels, eager to accept the new life of the trees.

The markers that I made to be with each tree will decay in time, as the trees themselves grow larger and stronger, and in a year or two they won't be needed at all, and the trees will have their own identities, as our two sons are starting to do already.
Posted by zeke at 9:18 AM 1 comment:

when we moved into our house there was a room in the basement that had obviously been a workroom or shop for many years.  It is where I set up my studio as well, and for the first several months I piled stuff on top of an old workbench that had been left in the corner.  The basement is pretty wet, and the legs of this bench had been standing in water for decades, slowly rotting from the floor up.  The top, with its marks of saws and hammers, rings from paint cans and globs of long-dried glue, was a Dead Sea scroll of home owning and fixing, upgrading and making that had been happening at this bench likely since before I was born.

I have no idea who made this thing or when it was put together, but I am tied to that maker by geography, as it was obviously built in this room.  It is too big to fit out the door as it is, so I am pretty sure it was built in here and has been here since.  It was cobbled together out of pine, all construction-grade, all different sizes, and all obviously scavenged from some other original purpose.  There is a row of holes drilled across the back, storage for screwdrivers and chisels all now packed and moved to where ever the maker now lives, if he is still living.  There are the long straight lines incised into the top that tell me about many and many a saw cut with a handsaw, much like the saws that I use myself.  It was held together with huge #12 screws, most of which were rusted in place.  These screws were sunk into end grain and used in ways that let me know that this was not a woodworker, this was someone with a knack for making stuff and a need for a bench.  This was not a woodworkers bench, smooth and clean and level, with precise and strong vises, ready to hold a piece of material for delicate planing in preparation for a precise and tight-fitting joint.  This was a rough-and-ready mostly flat surface, built quickly to simply give a place to stand and work on a variety of projects from building a Boy Scout pinewood derby racer to rewiring a faulty light fixture.  Of course I fell in love.

I could not use it as it was, and I had designated that corner of the shop as the place for the outfeed table for the chop saw, so the bench needed a new home.  And possibly a new identity.  I started to take it apart with the idea that I might make it into a new bench, someday.  Taking it apart was a journey in itself, as I could watch the maker trying to fit his scavenged lumber together in a way that would stand up.  Some of the pieces were too short and did not meet quite flush.  Some of them had huge nails augmenting the screws as they inevitably loosened over the years.  Removing these rusty screws is not something one can do casually.  It can not be done well with a power drill, no matter how careful one is.  The best tool remains a bit brace with a good, sharp screwdriver bit.  I used my grandfather's, and slowly and painfully removed the screws one by one.  The rust was mostly on the surface, and I can use those screws again, as you can see, and I saved them all against that.  They were remarkably well preserved down inside the ancient two-by-fours.

This resulting pile of dusty and rotting pine has been sitting in my shop now for over a year, waiting to be something one day.  Other projects became more important, and the wood, which had been waiting quietly for so long after all, was content to wait a little longer.  Then I read this post by my friend and colleague Niels about a little saw bench he had made.

The thing about a Western style workbench like the one in his shop and mine is that they are built to hold material while you plane it, at about 36" off the ground.  If you use a handsaw at this height, all the power comes from your arms, which are comparatively weak.  For longer-term sawing, and for greater precision, it is better to have the material below you, and use gravity to help you push the saw blade down.  Especially if you are rip sawing, or cutting along the grain a long board.  Shorter sawing benches like the one in his post help the maker take advantage of gravity and reduce fatigue.  In addition, you are pushing in to the bench and thus in to the floor, a very stable action, as opposed to laterally across a bench, in which operation your bench wants to tip or skid across the floor.  So I decided that I could use a sawing bench.  In addition, it would act as a workbench for my constant studio mate, who is only about 30" tall himself and can't reach my bench yet.

I had thought that I might plane all of the boards down until they were clean and smooth, but I could not bear to do it.  It would be like erasing the names from the front of a family Bible, a negating of the service that lumber had done for decades.  So in the end I just surfaced it enough to give me the flat and smooth surface I need to do my work well, and left the scars and badges of honor, the old paint and the odd nail still embedded.  Even so, the lumber fought me:  It did not like being meddled with.  A hidden screw dulled my handsaw with a shriek.  The old lumber split several times as I was cutting joints and had to be glued back together before I could continue.  In the end though, we came to an understanding, the old lumber and I.  In the end we have a wary peace, and are willing to try working together this way for a little while.

I drilled some holes for a holdfast, and a handle, all while my son looked on.  He learned the word "holdfast" and what it does, he helped me file the edges on the handle.  Next time we are in the shop, he will hammer nails at this little saw bench, and the next time I am hand sawing I will have a sturdy piece of furniture to assist me.  And maybe I will make a second one out of the remaining lumber so that I have a pair.
Posted by zeke at 8:50 AM No comments: