as most people do, I have a set of objects that are part of my daily accoutrements. Nothing earth shattering, most of it, probably very similar to the things that you carry. About six months or a year ago I decided I wanted one of those things to be a pocket knife. For many years a pocket knife was a standard part of my life, but I sort of fell out of the habit. It seemed a little too macho so I kind of let it go.
But I decided I wanted to carry a small knife, one that I could use to open letters, that kind of thing. What used to be called a "pen knife" in the days when pens were made of feathers or reeds and had to be constantly trimmed to stay sharp. So I started combing the flea markets and antique shops looking for the right pocket knife. Something small, with only one blade (maybe two), wooden scales on the handle. Something that is clearly a tool not a weapon, so that there is no false manly implication that I know how to defend myself. We get so specific with this kind of thing, and often I find that I get too specific and can not find just the right thing, so I never have it at all.
Karen found one for me for Christmas:

It is small, and I like the squared-off blade (developed by a Civil War amputee who needed to use the edge of his pants pocket to open his pocket knife as he only had one hand). The handle feels good in my hand and it is nice to have a good, sharp knife sometimes. So even though it was not quite what I had in mind, it has rapidly become a part of my daily coterie of objects. And it got me thinking about delight.
We all have objects that delight us, that have an emotional resonance beyond mere use. Many of the objects that I have made have this quality for me, that when I sit in them or hold them or stir scrambled eggs with them the experience is heightened and made more important and exciting, somehow, than they would otherwise be. I find that, for me, it is often objects that were made by someone I know and given to me that have this quality, though that is not true across the board. And though it is not true for everyone, I wonder how many people respond more to a made object than a bought one.
Of course, this gets into a bigger discussion about what is actually made and what is manufactured, and where the line is drawn, and whether there is any way to draw that line. This is a discussion that many much more erudite people than I are having, and is not really the thrust of this entry. I am more interested at the moment in celebrating the objects (bought or made) that bring me delight on a regular basis. The pocket knife (which is bought, after all, and industrially produced) is one. It is the kind of object that I enjoy holding in my hand, and that I enjoy using. And it has made me think about the objects that I have made for other people, and about whether they bring the same kind of delight to them.
What are the processes by which delight can be woven into the making process? How does an object move beyond being a mere object, and become my knife or chair or spatula or hat? Of course retailers have been trying to figure that out for years, and are not any closer to figuring it out, which makes me wonder if it is impossible to mass-produce.
Maybe delight is about stories. Maybe it is about memories that an object contains. Maybe it has to be about what the end user brings to it, and how the object gets woven into the user's lives.
This obviously bears more examination. In the meantime, though, it is nice to be aware of the delight that we feel in the world around us, even in carrying a humble pocket knife.
Posted by zeke at 1:27 PM 1 comment:

among the many things that I love about my family is our unshakable need to make things. Yesterday in passing I asked my mother if she had any books that might have instructions for making origami animals. The directness of the making process for origami is so satisfying, the only tool used is one’s hand, the only material a piece of paper. I only know how to fold cranes, though, and it has become a nervous habit, I find myself folding cranes in the places I used to smoke: in meetings, in bars, sitting around the fire, watching television. I though perhaps I should expand my repertoire.

Thirty or so years of being teachers and artists means that my parents have thousands (this is not an exaggeration) of books in their house. There is no subject that can not be researched here: gardening, Lincoln, the history of surgery, food, and, as it turns out, origami. Paper folding books were procured, old magazines were culled, and square paper was cut (see below). 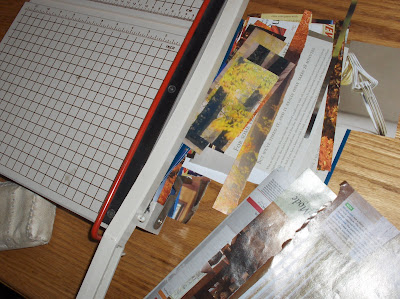 Last night we sat in front of the fire and folded paper. I started with a fish, which looked nice folded from an advertisment for pasta, and a "sleeping dog," which was not particularly satisfying. 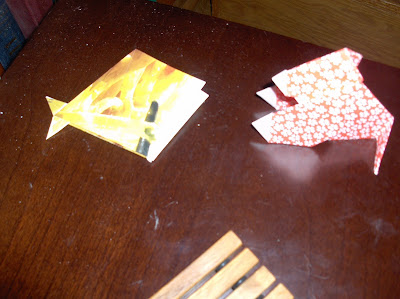 My sister (who is also here for a few days) started with a frog, which was a little advanced, and did not, initially, seem right: 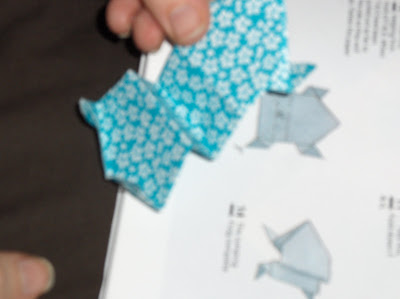 So I tried my hand at one, which worked out a little better. The interesting thing about folding paper shapes is that, like so many other things, there is a set of steps that must be followed, in order, and a deviation from that proves vexing. 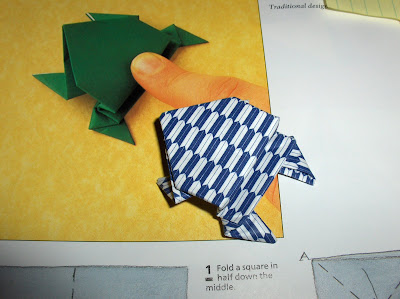 My mom was working on a butterfly, so I joined her, and we had a pair of butterflies: 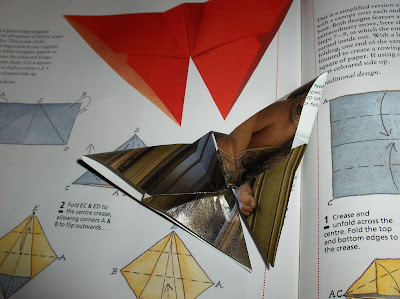 Next was a "star box," which needs to be made with paper that is solid on one side and colored on the other. Having the print on one side from the magazine took away, a bit, from the finished product. The curse of all that art school is the deeply sown habit of looking critically at every product of my hands. 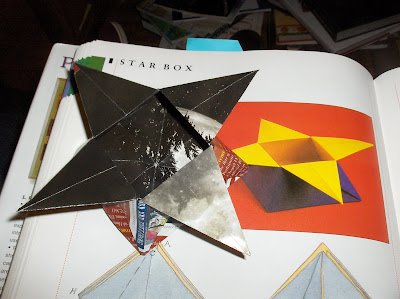 Then my sister showed us how to fold little paper boxes, which were by far my favorite. Easy to make, very satisfying when finished, and infinitely expandable, so that a set of nesting boxes can be made with nothing more than a sheet of paper. I see a LOT of paper boxes in my future... 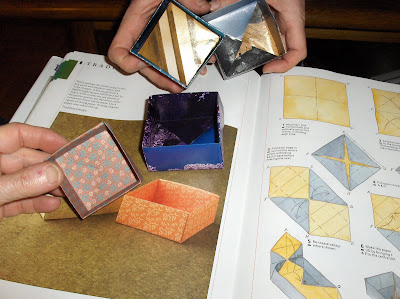 This is my kind of cold night, sitting in front of the fire with family, making things and laughing, (occasionally) not making frogs, drinking beer and telling stories. Though I am missing home quite a lot, having been gone for so long, and though I am looking forward to getting back in the classroom and back in the studio, this is the kind of recharging moment that is so vital.
Posted by zeke at 7:51 AM 4 comments: