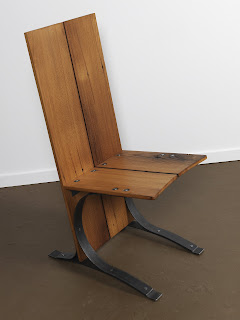 i love chestnut. It is just a gorgeous wood, honey brown, with big, open pores like oak but much much softer and kinder to edge tools. I have made a few projects with it, like the chairs at right. A dream to work with. Thought I would tell the story of chestnut, since it has been on my mind, lately.

In early America, chestnut made up between 15% and 50% of all hardwood stands in the Appalachian mountains. From Georgia to Maine, there were towering chestnut trees. They grew higher than a twelve story building, and the largest recorded was seventeen feet in diameter. Seventeen feet. That is you and two friends standing with your arms outstretched and your fingertips touching. Backpacking in the mountains of North Carolina I have seen stumps of chestnuts that were felled that are bigger than our old bed room in Brooklyn.

Because it was so plentiful, and so big, it was used for everything imaginable, siding (it is rot-resistant), beams, barrels, caskets, furniture, you name it. It isn't great for any one thing, but it is better than average for almost everything. And because it grows quickly (an inch in diameter per year in it's youth) there were more than enough to go around. In addition, the nuts were great food for pigs, which in Appalachia were often let loose to roam and forage for themselves during the summer months. And tanneries used the bark to tan leather hides.

In 1904 (the same year that the Crescent Tool company patented the adjustable, open-ended box wrench, or "Crescent Wrench") a fungus was brought into the US from somewhere in Asia. It was first noticed at the Bronx Zoo, and most people think that it came over on an exotic species that was installed there. By 1915, it had spread to Connecticut, and by 1940 almost all of the really big chestnuts had been felled. In 36 years, the tree that was once a staple material for so many industries was gone. The aftermath of the blight was wide ranging. An important source of food (for both animals and people) was lost. As all of the dead trees were cut down and made into lumber, mountain sides eroded in a big way. The tree trunks glutted the saw mills, which depressed lumber prices in areas that for the most part were already existing at near-subsistence levels. The tanning industry up in the mountains collapsed.

Chestnuts still try to grow in the mountains today, but when they reach a few inches in diameter, the blight grabs them and kills them off. Some work has been done to combat the blight, but so far nothing has really worked. The only place to get wide chestnut lumber now is by reclaiming it: it can be harvested from old floor beams and floor boards, from barn siding, and sometimes from posts and beams. And every piece now is a signifier of a different time, and a reminder of how precariously we are balanced, how easily things can collapse if a single link is removed from the chain.

Historic information in this post came from the article "Chestnut: Salvaging the Blighted Giant" by Victor Demasi