i have not really been able to get this idea of "becoming" out of my head. The more I think about it, the more I have felt compelled to try to address it. Not because I think it will change the world, but because it seems important to my process as a maker. If I am to bring things into being, it seems to make sense that I should know when they are a thing. A good friend and studio mate who used to be my teacher said that maybe the reason I did not connect to the cabinet is that it was a familiar furniture form, one that has to be done in a certain way, which depersonalises it to a degree. She may be right about that, but of course the hope is that I would get attached to every project.

So I embarked on a little project yesterday to explore this. I had a chunk of red oak left from another project, and I thought that I would do a quick project to see if I could identify the moment that it ceased to be parts an became a whole. As it turns out, though, I think I chose a form that pushed that perception unfairly.

I have a piece of beam left over from a dining table that I made, and I am just in love with it just like it is. It is covered with the marks of the hands of the people that shaped it a hundred years ago, with layout lines and augur marks all over it. I had been wanting to make it into a piece that honored the labor of those long-dead makers, and I had hit upon the idea of making a little figure out of oak (the beam is oak) that would sit upon the beam, as a visual statement about how small each of us is individually when compared to our work, which is what we have that will last after us. So I thought I would make a small figure as this "becoming" experiment, and finish off that piece all at once. 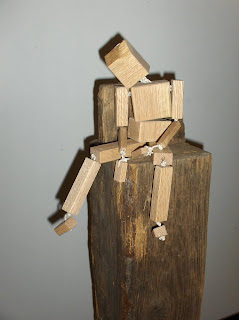 The thing about the human shape, of course, is that it is the one shape that we are trained from the very beginning to recognise in whole or in part. So I guess it is not terribly surprising that my little figure took on an identity very early on. I have been calling him "Mr. Block," after the U. Utah Phillips song, although he has nothing at all to do with the content of the song. Here he is sitting on his perch on the beam.

The idea was to make a figure that was repeatable in a variety of sizes and that is totally androgynous, although I have assigned this one a gender. I thought I could keep them gender neutral, but found very quickly that I have a very hard time not assigning an anthropomorphic object human attitudes and emotions, which made it necessary to assign it a gender so I would know how to address it. As time allows, I want to make a lot of these figures.


Here is a video that my good friend Kevin put together out of photos that I took at every step of the making process. Thanks Kevin! You rock. The interesting thing to me about it is that as soon as the head is put next to what will become the torso, it starts to look human to me, and starts to take on the qualities of the finished piece. Once the head, torso, pelvis and legs are laid out, there is no question in my mind, it is a human figure. By that point in the process, I had started talking to him, telling him about what I was doing, and what part I was working on next. He was very patient. Now he is reclining on my workbench, after a photo shoot this morning of him sitting in various places around the studio.

So I have not reached any conclusion about the question at hand. Probably I never will, of course. The answer so far seems to be that it just depends on the project, and about my attachment to it. It is something that I look forward to continuing to explore. In the meantime, I think Mr. Block might have some adventures, which I will do my best to document
Posted by zeke at 4:14 PM

hey zeke,
i stumbled upon your blog and have been enjoying your writing.

regarding your last two posts, i offer another craftsman's perspective: sometimes a box is just a box; let it be. your chest of drawers may not inspire you, but that doesn't mean it fails. not all objects must be precious or have overt personality.

a shovel handle is not usually associated with anything artistic or beautiful, but if it was attached to the shovel your great grandpappy always used to shovel out the mule stall, even i would gaze upon it rapturously.

imho, your block-head (wasn't he a character on gumby?) project is unrelated to a chest of drawers. as you discovered, its impossible not to anthropomorphize a human figure, even when abstracted. clothespin doll anyone? cornhusk doll? maybe if you place the new block man on the chest of drawers, or in one of the drawers to sleep for a while, the cabinet will start to "become". or just hang onto the cabinet your whole life, and your now-growing baby will likely associate value and "objectness" to it simply because it was yours. kind of like the velveteen rabbit...

Thanks for your much needed thoughts! You are dead right about letting things be, sometimes. This is a lesson that I often need to be reminded of.

Belloq shows Indiana Jones a watch and says "Look at this watch. It is worthless. Ten dollars from a vendor in the street. But I take it and bury it in the sand for a thousand years and it becomes proceless." Age and stories can be powerful agents for helping objects take on meaning, and maybe that is what is needed for a more emotional attachment to my little chest of drawers.

Thaks for reading, and I look forward to continuing this conversation.

I don't mean to dabble too much in arm-chair psychology here, but it occurs to me that all this questioning of "being" might have a smidge to do with playing a part in the creation of a soon-to-be real-life "being." or am I off my rocker?

broad minded-
He did say to me "did you read the new post about the baby?"