i love books. I always have. I love the heft of them and the smell of them and the theatrical act of opening one, whether it is for the first time or the 20th. The books to which I return regularly have what a friend called the “patina of Zeke” on them, dogears at the good parts, phrases underlined, worn covers. “Life on the Mississippi,” “The Dramatic Imagination,” “The Hobo’s Hornbook,” these are markers in my life and repositories of ideas or turns of phrase or images that are important to me.

When I started out as a set designer in New York I was not (to put it mildly) internet savvy. I still am not, maybe, but it is arresting to me what a difference twelve years can make. I did not even have an email address at the time, which seems outlandish to me now. And for years, every show that I designed would send me off to the New York Public Library and the Strand. I bought two or three books per show, and checked out several more, the big coffee table books with lots of photos in them, to use as research. Books about the wild west, and about the Louvre, and English Georgian houses. Figure drawing references. “How to Paint” this or that. As my library grew, moving became more difficult, but Karen and I both are comforted when surrounded by our books. In our last apartment, I built 150 linear feet of shelves for our books, which was not enough, as it turned out. We have a lot of books.

In preparation for our move, I have spent tonight going through the big books, pulling out ones that I have not opened in years to donate to the RISD library. I spoke to the head of the Library who said that any books that do not go onto the shelves will be sold to buy more books or other media. Many of these are volumes I have not opened since we moved here, and maybe not for years before that, and so I know that the appropriate thing to do is to turn them over to an institution that will use them, to a place where they will be opened and read which is what they are for, after all.

I have pulled out 88 volumes so far, most of them big picture books. It has been a hard process. Some of them are inscribed from friends along the way, some of whom have fallen out of my life, and seeing their handwriting congratulating me on an opening night or graduating from college or a birthday brought wistful smiles and floods of memories. Here they are, all bagged up and ready to move to their new home: 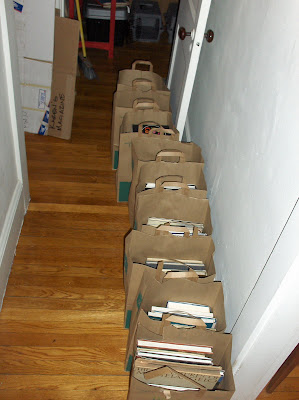 Books remain a favorite method of mine for storing knowledge and memory. Having now been on the creative team charged with producing a book, and having written and laid out and published my thesis, I have more of an appreciation for what a book is, not just what it says, for books as designed objects, which has given me another layer of appreciation. Cheyenna and I were talking about the need for each generation to produce documentation of some kind, especially, as with the Hobo Hornbook, the need for documenting the thoughts and history of the working class. In an age when so much that is written from person to person is done in a media that does not lend itself to being kept in a cigar box in the attic or pasted into a scrap book to be found and archived by descendants, it is hard for us to see what that documentation will be.

I am learning a lot about storing knowledge these last couple of years. I am learning (though I still have the clumsy absence of fluency that fades with practice when learning a new language) to read the knowledge that is stored in objects that are not books. I am learning to read the adz-marks on an old beam, or to decipher the logic in the way a line is rove through a block and around a pin, or to decipher the collective trial and error that led to a saw’s teeth being set in a particular way. I am learning to read the rings of a tree or the wear on an old tool or the construction of a piece of antique furniture. Pulling all of those books off of shelves and putting them in bags brought into sudden sharp focus all of the other methods of reading of which I am becoming aware. These other storage systems are gaining a credibility in my life that they did not have before, and it took the act of sitting down with books as objects, as “containers for memory” as Bachelard would say it, to bring that into sharp focus.

I will miss these old friends. I will probably regret giving them up. But I will know that they are moving to a new life, and that they will be cared for well.
Posted by zeke at 9:43 PM