not sure you have any reason to know Steve Wishnevsky.  I sure do, he has been a part of my life in various ways for about twenty years or so now.  Ex-hippie, musician, maker, grump, writer, community builder, crusty old fart that he is, he helped shape who I am pretty profoundly.  I met him in the early ‘90’s in Winston-Salem at a jam session that he was running.

I had only recently figured out that the long skinny end of a guitar went in my left hand and the big round part went against my body on the right.  It was through the extreme patience of Wish and the community of musicians at the weekly jam session at a little restaurant (now long gone to make way for a freeway overpass) called the Rose and Thistle that I slowly started to figure out that a guitar might be used as something other than a prop to attract young ladies, it might be used to, you know, make actual music that some people might even want to listen to.  This was a revelation to my twenty-year-old self.

I have played at a lot of jam sessions over the last couple of decades.  I have played in front of people as well, alone or with bands, as a regular member or as a guest, and I have learned a lot from a lot of people, but it was the initial welcome into the world of making music that Wish and the folk at that jam session extended that made it possible.  It remains to this day my favorite way to play music.  That is, with other people also playing, playing to and for and at each other all at once, with many voices rising and many hands working, joyously creating together something that is so much more grand than the sum of its parts and that transcends music and the act of making music and becomes the act of creating community.

Among the things that Wish makes and has made for much of his life is musical instruments.  Some of them are pretty strange, and they all bear the mark of a mind that, as we used to say down where I grew up, “ain’t quite right.”  In this case, Wish ain’t right in all of the best ways.  He experiments with woods that most luthiers would turn up their nose at.  He makes odd contraptions like harp guitars with experimental tunings or ten-string classical guitars.  I would not even know how to play most of what he makes, to be honest.

For the holiday this past winter I wanted to get a Wishnevsky guitar.  I have been making a lot of cigar-box guitars with a tenor scale, and have been getting pretty comfortable playing at that size, and I wanted a “real” guitar that had that scale to play around with.  One of the things that Wish has been doing a lot lately (well, for a long time, really, but lately I have been more aware of it) is re-using things that otherwise might not have much of a life left in them.  Of course this resonates with me.  He has also been getting locally felled wood for his instruments.  So the proposition that I could own a guitar made of wood from my hometown by a maker who lived in my hometown proved too irresistible a draw for me to pass up.  It finally arrived this past week, and it looks like this: 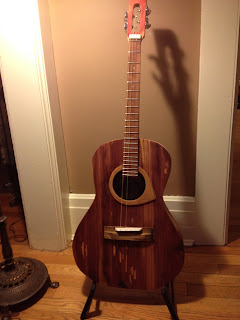 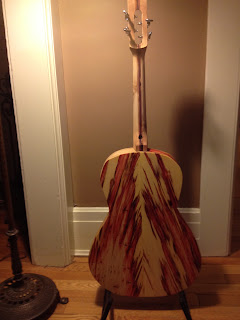 The back is just crazy, wormy box elder, which is not a wood one would typically use to make a guitar.  I am sure glad that he did, though.  It looks like hot rod flames drawn by fungus that get in to the tree, spreading the red pigment that can be typical in box elder.  In time this redness will fade, which means that the guitar itself will change identities visually as it ages, in the same way that all guitars change tonally as they age and the cells of the wood get older and more mellow.

The top of the guitar is made of cedar salvaged from the firewood pile and has the high-contrast flecks of red and white that mark red cedar.  The fingerboard is dogwood, a very hard wood that makes me think about climbing the twisting dogwood branches in my yard as a youth.  The dogwoods were the most accessible trees for a young climber, low to the ground with a lot of branches of a size that was good for small hands.  They provided a different kind of lesson as I grew, eventually occasionally breaking beneath my weight and teaching me about gravity and pain and the need to respect the natural limits of trees and people alike.

Needless to say I have been really enjoying playing this guitar, and I look forward to playing it with others in the very near future.  When I play it I am making music with my hometown and my childhood.  The trees that gave their lives to make this instrument grew up breathing the same air that I did, they felt the same sultry heat of North Carolina summers as I did, they absorbed the same sunlight as me.  I feel connected to this instrument immediately, and it is a real joy to play.

In an important way this is what powers me.  This idea that we can be a community of makers, that we can make what we make in a way that is heavy with meaning and that builds community and uses objects or music or movement or even just a way of thinking to create ties that are positive and supportive helps me get out of bed every day.  Most of the people who have been important to me in my life over the years have been community builders each in their own way, and this idea that together we can make the world better is a primary motivating force in my life.

It is a pretty fortunate place to habit.  I am thankful.

Would love to see a little video of you playing that hot rod!

Thanks for your thoughts on your blog. Good stuff to think about.

Would love to see a little video of you playing that hot rod!

Thanks for your thoughts on this blog. Great stuff to think about and inspiring.