as I age (I am occasionally reminded that I am pushing forty) I am mellowing.  Though there are things that I believe firmly and fiercely, my overall world view is getting more relativistic as I wander farther into my time on this planet, and many of the things that I once felt stridently about are getting harder to parse, with "right" and "wrong" being less abundantly clear.

In 1997, as I was in my final year of my second undergrad, I took a class from a teacher and mentor and friend named Bland Wade.  He runs the Theatrical Properties department at my alma mater, and in addition to being a great teacher (one of the highest compliments I can pay) is also a great designer and craftsperson.  Though I have not seen him in a few years now, he remains present in my life in a number of ways, not least in this little footstool: 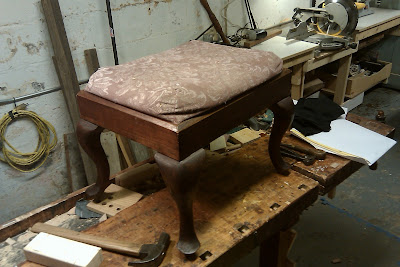 I took a class from him in my senior year called "furniture for the stage," in which one of the projects was this footstool.  We carved the cabriole legs ourselves, assembled the stool, upholstered it, and finished it.  Though it was built for the stage, I have kept mine all these years and it has seen some hard use, always being paired with a chair that belonged to my great-great grandfather, even wearing the same upholstery fabric for many years.  But the legs have gotten loose, and the upholstery is sagging, it was clear that fifteen years later it was really time to attend to this little workhorse of our living room.

So I took it down to the shop and started to disassemble it.  One of the first things I noticed was my signature: 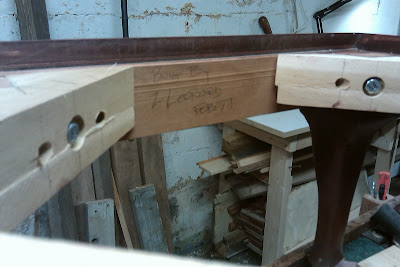 I remember being so proud of this stool when it was finished, and thinking that it would last forever.  In a way, I was right, to a twenty-two-year-old fifteen years is functionally forever, isn't it?  I remember thinking that I now had the secrets to making furniture, and that this would be a family heirloom, and that my great grandchildren, whom I would never meet, would have this stool.  See, I thought this way even fifteen years ago.  No wonder I can not escape it now.

This is how this stool was put together: 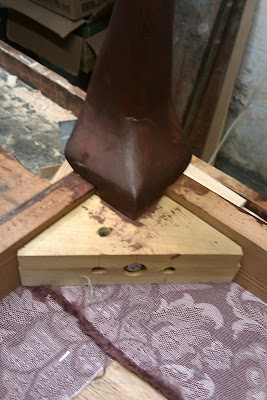 Lag screws and drywall screws.  Not a "for the ages" construction methodology, really.  Wood, as I think I have written about before, expands and contracts with the seasons.  In humid summers it absorbs water from the air and swells, in the winter when the air is drier it loses the water and contracts.  When you put metal fasteners into the wood (which do not expand and contract with the seasons), they crush the wood fibers that expand around the fastener, so that when the wood shrinks again the hole is too big for the fastener.  Over several years this can make the hole permanently too big for the fastener, and in this case makes the legs loose.

The important thing to remember here, though, is that this was intended to be a theatrical prop, not a piece of heirloom quality furniture.

Everything in the theater has what can be an interesting dual life:  they are simultaneously used much harder than normal objects and used for a much shorter time than normal objects.  There are no forces more destructive than an actor in the throes of a scene or a careless stagehand rushing to complete a backstage task in the dark.  So objects get beaten up, clothing gets torn, doors get slammed much harder than in real life, even in a house with a toddler or a teenager.

So when we built this stool, the intention was to make an object that would stand up to that kind of use over the run of a show, not to the slow and inevitable wear to which the seasons subject it.  Subtle difference, maybe, but important.  Thus the lag screws.

Disassembling this object, seeing its guts again after fifteen years, has inspired me to think about these intentions, and about the ways that we choose what is appropriate.    The construction and lack of refinement (there are bandsaw marks and file marks on the cabriole legs, for example, something I would not normally allow to remain on a piece I made now) were completely appropriate for the intended use of that object, and only seem out of place when looked at in a different context.  In the same way, the methodologies that I now apply to my work would be completely inappropriate in a theatrical context, as they take too long and are too exacting for that milieu.

Which of course also gets me thinking about the relativistic nature of so many of my other beliefs.  Obi-Wan reminds Luke that "you will find that many of the truths we cling to depend greatly on our point of view," which I find true more and more.  With the exception of rules about hitting and hating and stealing, there are often more than one way to look at a lot of the issues in my life just now, and I am trying to be more mindful about the fact that alternate approaches are worthy at least of a thoughtful ear and patient consideration, even if they seem at the outset to be misguided or inapplicable.
Posted by zeke at 8:09 AM

Glad to see you blogging again Zeke. I do enjoy your pen. And a nice trip down memory lane as well.