on rituals and passing them along

rituals are important, of course.  As I raise my son, I am working to imbue in his life a number of different activities that are ritualistic to a greater or lesser extent, one of which is frequent and regular time spent actively making things.  Impossible to tell if it will stick of course, but that is the plan as it stands.  So weekend mornings we go down to the shop (which at nineteen months he pronounces as "shah") to make stuff.  He knows that I wear certain shoes in the shop, and has taken to bringing them to me and saying "shah, dada!" Melts my heart.

Once in the shop, I sit him on the end of the workbench, where he pounds away happily as I work.  As I can not leave him alone there, I have had to create projects that can be done entirely at the bench, which means that they have to be made entirely by hand.  Over the last few weeks this has been a valuable way for me to reconnect with a part of my making life that I had been letting slide.  Here is a photo of him on the bench: 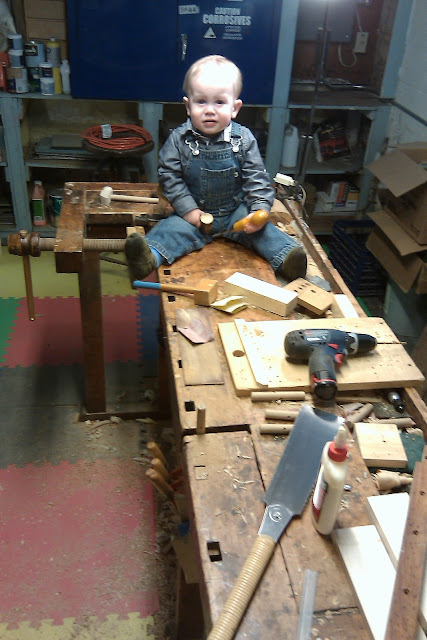 The little mallet in front of him with the blue painted handle was a part of my first ever tool kit, which you can see here: 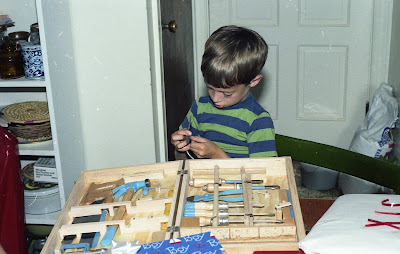 As you can see, the chisels were real chisels, the saw was a real saw.  I used that kit to build all kinds of things for years, and still have (through the auspices of my father, the family historian) some of the tools from it.  I will not give my son real chisels yet, of course, but he has a screwdriver that he calls his chisel, and he will very studiously hold it on a piece of wood and hit the back of it with his little mallet, copying in miniature what he sees me doing.

As this blog is mostly about making, I thought I would show what I have been making for him.  He loves pounding and hitting right now, so it seemed to make sense to make him a pounding bench like the one that I had as a child.  Good for teaching fine motor skills as well as giving him something that he can hit as hard as he wants, so it is a win-win.

I had some ash that was left over from a project several years ago.  I don't use ash much unless I am bending it, so I have been carting this stuff around for a while, and I finally decided to use it for this.  I did all of the work by hand, even cutting pieces to size, which is an operation I would normally do on the table saw.  There are a couple of benefits to this:

First, I got to use my big bow saw, a tool I seldom use any more.  I could almost feel it quiver with excitement when I took it off the wall.  The blade is of course still sharp, and it sang through the wood, ecstatic to be useful again.  Damn fine, clean cut.  What a joy to shake hands with a friend one has not seen in a while.

Also, Thomas learned about marking and sawing.  Every step I take in the shop I talk about with him, so we talked about pencils (which he calls "p'tiss" which is also what he calls his penis, which can be confusing sometimes.  I often have to rely on context to know which he means.  A little like speaking Chinese) and drawing lines on wood.  Then we talked about saws, and about different saws (which he pronounces "Shah," again, very similar to the way he pronounces "shop.")  He watched me saw the wood to length, and since then has used his little toy saw on all kinds of things around the house, saying "shah, shah" as he does so.

Now when we enter the shop he starts by sitting on the bench and pointing out all of the tools and naming them, taking great pride in naming each one as I point to them.  He is learning that these things have identities and uses, and he is learning what those uses are as he watches me.  I am working on what the next project will be that I can work on with him, for a couple of reasons.  I love reinforcing in his little brain the import of making and using his hands, but it also is such a vacation to be making things at my own pace by hand in the shop that I really treasure my time in there on these weekend days.  How lucky.

Here is the finished pounding bench and hammer that we made: 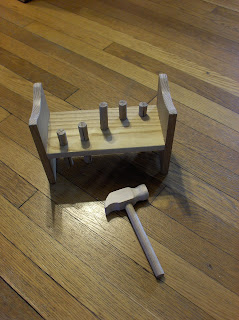 And here he is using it.  I love that look of extreme concentration as he pounds. 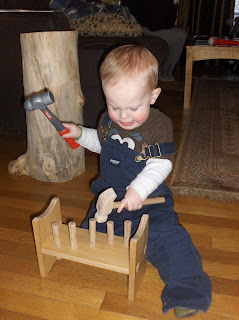 I had a pounding bench...as did my son..Great learning tool.