As he showed me my room on our first night here, the tall, blonde, German (?) guy who works the desk at our hotel pointed out the lintel above an alcove in my room that leads to the bathroom.  "Be careful," he said, "in Japan it is painful to be tall."

Now, I am not a tall guy, being as I am several inches south of six feet.  On the other hand, I am in a country in which I routinely find myself talking to or walking past adult humans who do not even come up to my shoulder.  So I crack my head on that lintel almost daily and every time I do I think to myself "In Japan it is painful to be tall."  We leave tomorrow and I wonder if I will even then be trained to duck as I step up into the little alcove. 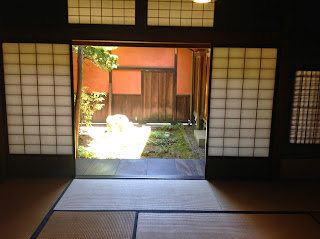 The alcove is worth noting (and I have been since I got here not just because I keep rediscovering the top of the entry with my skull) because it represents a very Japanese space: engawa.  Transition is important in traditional Japanese architecture, and passage from one space to another, though fluid, is also often tightly composed.  An engawa space is one of the ways that this happens.  Typically it refers to a sort of veranda on a traditional Japanese house that is either open to the elements or enclosed with screens.  Here's a photo I took of a traditional house in a town called Takeyama last time I was here.  You can see the tatami room and then, beyond the screens, the engawa.  The user of the space does not walk out from the house into the garden, but has a period of adjustment, and interstitial space that eases the transition.  The other thing that this space does is that it allows for very deep eaves on a traditional house, which is good since shoji screens are mostly paper and those eaves protect the walls of the house and the paper screens form the elements.

I don't have a veranda on my third floor room, of course, but this idea of "in between" space is so strong here that in a "Japanese style" room that is not very big to begin with I have not one but two of them.  I have been thinking about them as my own little engawa spaces.  They both have hardwood floor, and they flank the tatmi room, one inside the door and the other in the headbanging space between my room and the bathroom.  In fact, to come into the room, there is a little entry, maybe 3'-0" by 20", then a little step up to an engawa space which is where the closet for my futon is, and then you finally step onto the tatami.  The whole of the entry is maybe 36" x 60", so not huge, but there are several transitional spaces, utilising changes of level as well as changes of material and color.  The hardwood helps protect the tatmi, of course, but it also allows for an entry into a space, it compresses the user into a small space before opening them up into a larger, brighter space.  This has the effect, among other things, of making the space feel bigger than it is, because the user is experiencing it in contrast to the very small transition space.  The American architect Frank Lloyd Wright used this kind of transition quite often, and I think he learned it in his travels here.

Being aware of this and experiencing it has been reminding me about the importance of transition, and of honoring the need to allow for transition.  So often in my life I do not build in time to process, time to enjoy, time to reflect.  So often I go from one thing directly into another.  Maybe there is value in emotional engawa. Temporal engawa.  Even in this small space "transition" is important enough that space has been set aside for it.  Maybe I would do well to take that lesson and apply it elsewhere in my life. At the very least I will tell myself this is why it was so important to put that lintel where it is.  Not just to make it painful to be tall.

Though in Japan, it is painful to be tall.