Death: Before and After. 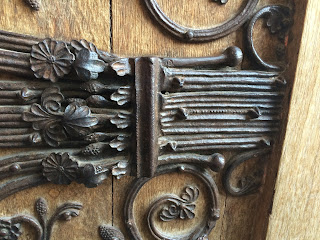 We only had a couple of days in Paris before we moved on again.  Paris (like any major city) is impossible to "do," in the sense that you hear sometimes ("Well, we did London last year and this year we are going to do Paris).  There are so many layers; so much history, so much present, so many cultures, so much much much that I think you could live there for years and never “do” it all.  I lived in New York City for almost ten years and never made it to the Statue of Liberty, after all.

We happened to be staying a stone's throw from Notre Dame de Paris, and almost accidentally the trip became (mostly) about this structure.  Of course it is art-historically significant and I studied it just a bit in college, and of course I was roughly familiar with it as a structure, but truly photos can never prepare one for actually inhabiting a building.  What a breathtaking space.

It is a Gothic cathedral (perhaps the Gothic Cathedral) that is vast: Vastly wide, impressively long, and tall in a way that quite successfully makes a human feel tiny in the presence of god, which is what that space was meant to do after all.  The builders employed a brand-new architectural conceit that we call a “cluster column,” that is, on the face of the piers that hold up the distant roof are carved delicate, tiny columns, one next to the other in a cluster, almost like a handful of asparagus, or maybe like holding a bunch of drinking straws of various sizes.  The effect of this is to draw your eye up up up to the vaulted roof, you almost can’t help but follow the columns up to the heavens and there, peering up at the roof in awe you realize you are gazing heavenward and feeling small.  Success in architecture.

This is a building that was begun in the 11th century and took a couple of hundred years to build.  Thousands upon thousands of stones to be dressed and put in place, tons of iron to be smelted and cast and forged, beams to be hewn out of trees.  It is a representation of millions upon millions of labor-hours of work across generations. 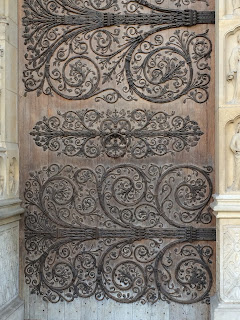 I was particularly smitten by the hinges.  There are of course three main doors into the western end of the Cathedral (this is normal for cathedrals, especially of this style).  Each entrance had a pair of doors and each door had three hinges.  “NBD,” as my students say.  But these hinges are something else.  Large in scale, as everything is large in scale in this structure, and strong, but visually delicate, almost spidery.  They are massive pieces of forged iron, but have an æsthetic identity that is almost light.  Knowing as I do a little bit about blacksmithing made me appreciate these hinges even more:  the idea of forging them, even in parts, of getting that intricate detail without deforming the steel, of achieving that level of symmetry again and again really is a staggering thought.  To look at these hinges was to look at the work of a true master, a person who is so comfortable with their hands and their tools and their material that they can make things that no other, or few other, humans on the planet can make.  This person or these people lived a thousand years ago, and not only does no one now know their names, there is probably no way to even find out what their names were.  All we have is their work which stands still, a thousand years later, as testament to lives lived in service to making things with their hands that are of use and that are beautiful and that are made in a way that with care they will still do what they are intended to do a thousand years hence.  What in my life does the same?

Which brings me to the Paris Catacombs.

Different from the Roman catacombs in almost every way, the Paris catacombs are a series of tunnels that started as an underground quarry for that white stone that is ubiquitous here.  In the late 18th century they started to collapse, and engineers were sent down to shore them up.  At the same time, several cemeteries were being emptied, and all of the bones were brought down into the tunnels and stacked down there, since there was nothing else to do with the space.  This resulted in a spectacularly creepy environment deep deep underground.

We have to a certain extent become inured to skulls and bones, I think.  We see so many toys and Halloween decorations that are skulls and bones that I thought this would be more of the same: slightly creepy but mostly cool, and a fun afternoon.  I was wrong on all counts.

As a starter, walking down a continuous stone spiral staircase some 9 or 10 stories underground is enough to creep me out.  No elevator, so no quick escape if needed.  No landings, either, just a relentless spiral down down down into the clammy darkness.  The monotony of this part of the walk is meditative in its way, though the meditation is less than relaxing.  At the base of this stair is a hallway, about 6 feet wide and maybe seven and a half feet tall in the center of the gently arched ceiling.  Electric wall sconces light the way every thirty feet or so on alternating sides, meaning that the light is patchy, yellow, and barely lights the floor which is sloping, pitted, and, as my wife pointed out, “not something you would ever find in the States.”
The depth of this tunnel is almost palpable, you are keenly aware of the hundreds of feet of stone above you.  Every so often there is a tunnel off to the right or left, dark as dark can be and locked off with an iron door like a prison door.  I always find that not knowing evokes feeling considerably more than knowing, and the mystery of the dark tunnels with locked doors intensifies the already heightened feeling of extreme creepiness.

Then you get to the bones. 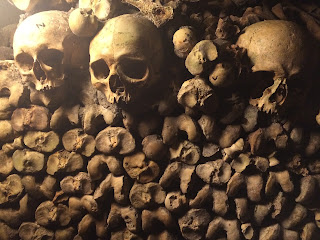 It is almost like some Disney exhibit, there are so many.  Like the entrance to some ersatz “pirate cave.”  But these are real.  And there are thousands upon thousands of them.  Six or seven foot retaining walls have been built out of femurs, with courses of skulls either facing in or out.  In some places the skulls have been arranged in a shape, like a heart or a cross.  In others they just continue in a long row, face after fleshless face staring forever across the hallway at face upon fleshless face staring back. 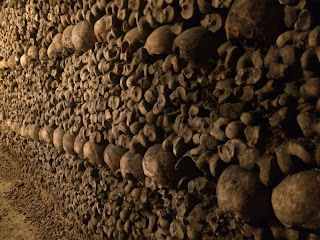 I had a real “poor Yorick” moment as I walked through the cool damp semidark:  All of these bones had been a person, had been a child, had grown up, might have been a parent or a sibling or a grandmom or a granddad.  They probably loved and were loved, they might have sung songs or played with their children, or enjoyed a sunset.  They had birthdays and holidays, they celebrated and cried.  There was a human life attached to each of these tens of thousands of femurs, each of the tens of thousands of these skulls.  No one will ever have any way of finding out who these people were, where they lived, or what their favorite food was.  We won’t know who their first kiss was or what they did as a job, or what was important to them.  These people have been dead for hundreds of years.  All we have are their bones.  Which of course is where the rest of us are are all headed in time.


Which brought me back to Notre Dame de Paris, and to the door hinges.

The people who made the door hinges are long lost in time (“Lost in time like tears in rain,” as Roy Baty says in the Blade Runner movie), but those hinges remain, and they keep doing the work they were intended to do.  Every morning the doors swing open and every evening they swing shut, and the hands of the people that put those doors on the hinges and the hinges on the building, though long decayed to bones, are accessible to us.

We are so temporary, so fleeting, so small in space and time.  What the Catacombs and Notre Dame made me think about is the import of making my short time here really mean something, and of how much I want to make some things that live longer than I do, even briefly.
Posted by zeke at 1:56 AM